The Levadas, From Irrigation Channels to Walking Trails in Madeira Island

Levada is an irrigation channel or aqueduct specific to the island of Madeira. The name levada derived from the word “levar”, which means “to carry”.  Madeira Island has a very rugged topography carved by numerous waterways, some of which torrential character, carrying huge flow for a short period of time and as such, could drag large sediment loads that sometimes originate violent destruction and tragic downstream. Because there is a differential availability of water on the north side compared to the south, a result of the geographical orientation of the island and its vegetation, the early man realized the need for the transport of the same from north to south, in order to meet the growing needs. 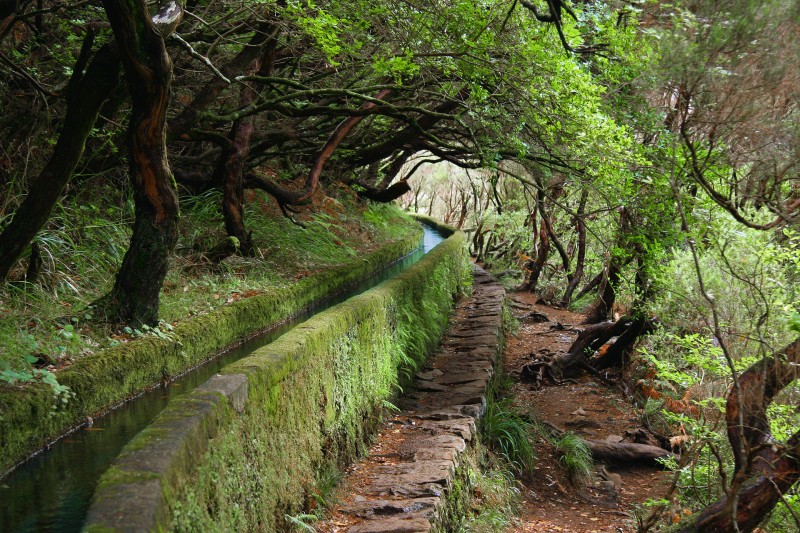 So build up the Levada in nearly inaccessible places, almost all of the island, in the form of channels or narrow aqueducts and many long, that carry water from springs and streams, along the steep slopes. Nowadays, the Levadas are a cultural landmark of Madeira and further are a tourist attraction and is already known internationally.

They have a very important role in the management of water resources and concomitantly provide sustainable enjoyment of the Natural Heritage.

The levadas originated out of the necessity of bringing large amounts of water from the west and northwest of the island to the drier southeast, which is more conducive to habitation and agriculture, such as sugar cane production. In the sixteenth century the Portuguese started building levadas to carry water to the agricultural regions. The most recent were made in the 1940s. Madeira is very mountainous, and building the levadas was often difficult. Many are cut into the sides of mountains, and it was also necessary to dig 25 miles (40 km) of tunnels.

Today the levadas not only supply water to the southern parts of the island, they also provide hydro-electric power. There are more than 1,350 miles (2,170 km) of levadas and they provide a remarkable network of walking paths. Some provide easy and relaxing walks through beautiful countryside, but others are narrow, crumbling ledges where a slip could result in serious injury or death.

A popular levada to hike is the Levada do Caldeirão Verde which continues as the Levada Caldeirão do Inferno. Altogether it is about 23 miles (37 km) long. Along both parts there are long sections which may cause hikers to suffer vertigo; and several tunnels for which flashlights and helmets are essential. The Levada do Caniçal is a much easier walk. This levada runs 7.1 miles (11.4 km) from Maroços to the Caniçal Tunnel. It is known as the mimosa levada because acacias (commonly misnamed mimosas) are found all along the route.